Homemade hand sanitizer is surprisingly easy to make, and it’s a great way to fight germs when you can’t get to a sink to wash your hands. 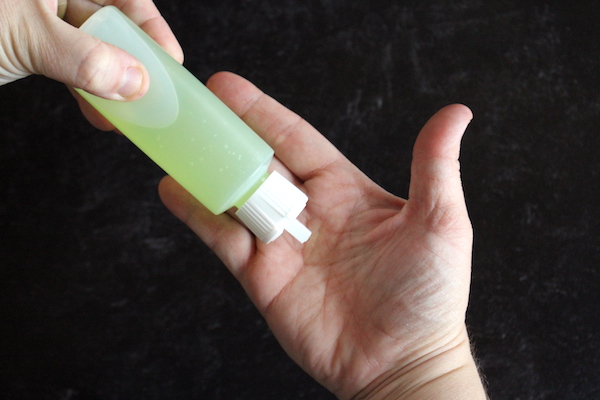 Hand sanitizer is one of the first things to disappear during an outbreak, second only to face masks.  Just days after the first community transmission of COVID-19, shelves emptied as people suddenly rushed out to buy hand sanitizer.

I’ll admit it, I was one of those people that bought a bottle once the virus reached the US.

Hand sanitizer isn’t generally a part of our lives, and under normal circumstances, I’d rather just wash my hands regularly and rely on my strong immune system.

This flu season though, as I watch people sneeze their way down the aisles of the supermarket, I find myself wishing I had a little bottle in my pocket.

I found a bottle easy enough, but just days later the store shelves were empty and most people weren’t as lucky.

In truth, substitutes for commercial hand sanitizers are actually really easy to make.  The active ingredient is just rubbing alcohol, and so long as your homemade hand sanitizer is at least 60% alcohol, it’s effective when used properly according to the CDC.

Simply putting rubbing alcohol in a small spritz bottle will do the trick, so long as you thoroughly wet your hands, rubbing to get between your fingers and such.

That said, if you’re looking for a more elegant solution, I’ve found a few options for homemade purell substitutes.

So for starters, what’s actually in purell anyway?

The ingredients list is pretty long, but once you decode it, it’s actually just three basic things:

So in a nutshell, gel hand sanitizers are denatured alcohol, skin conditioners and some kind of gelling agent.  That’s it.

The skin conditioners are handy if you’re using it multiple times a day, and can help prevent dry hands. In truth they’re optional, and using a separate lotion works just as well to prevent dry skin.

Gelling agents are there to help the sanitizer sit neatly in your hand and prevent dripping, which in turn results in more people using it.  If it drips on your lap or makes a mess, you’re less likely to use it.  That said, they’re not actually sanitizing your hands…so also optional.

So the only thing sanitizing your hands is alcohol (and maybe the glycerine if you want to get technical).  The simplest option for an effective homemade hand sanitizer is simply rubbing alcohol (at least 60%) in a squirt or spray bottle.

That said, if you’d like to actually try to re-create a gel hand sanitizer with skin conditioners and a gel texture, read on….

How to Make Hand Sanitizer Gel

My first thought was that with 2 parts alcohol it’d never be a “gel,” but I put it to the test… 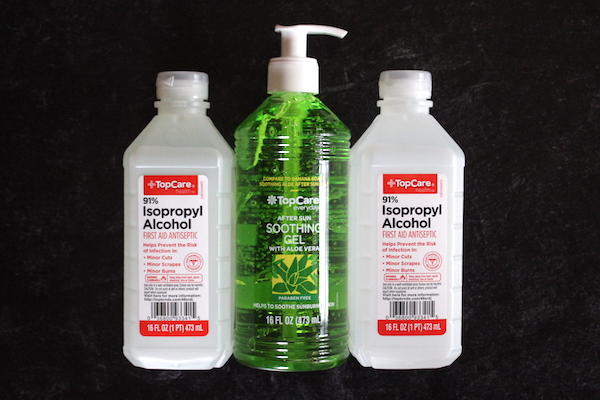 The alcohol is doing the sanitizing work, and the aloe vera gel adds both skin conditioners and a gel-like texture, at least in theory.

Aloe vera gel, however, is actually mostly alcohol.  Or at least most of the bright green “after sun gel” bottles commonly available.  Their ingredients list stats exactly the same way as purell…water, denatured alcohol, glycerine, followed by a long list of stabilizers and gelling agents, with just a teeny tiny bit of aloe juice.

I doubt aloe gel is anywhere near the required 60% alcohol, but it is full of chemical gelling agents that work in the presence of alcohol (plus a few skin conditioners for good measure).

(It’s actually hard to make a gel from alcohol.  Things like agar, gelatin, and arrowroot won’t work in a high alcohol solution.  I tried, for science, to come up with a more natural version, but polymers are what works…) 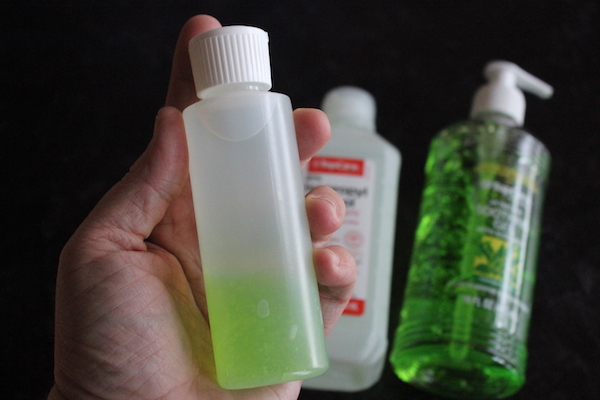 It took a lot of shaking to get them to combine, and initially, the mixture was pretty thin.  I was unconvinced.

About a half an hour later when I picked up the bottle, it had actually thickened considerably.  Give it a shake and it’d actually hold air bubbles within the gel in the bottle.

Look closely, you can see them in there, held in a totally passable homemade hand sanitizer gel. 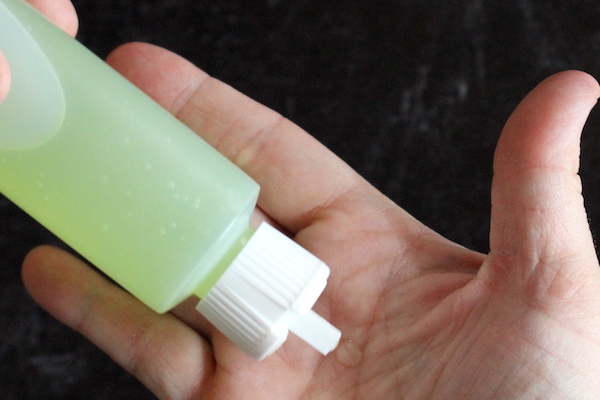 Hand sanitizer with aloe gel forms a loose gel that actually holds bubbles and is a good bit thicker than alcohol alone.

There is one more crucial part missing…fragrance.  While it is technically optional, this stuff smells horrible.  Or, more accurately, it smells like very strong rubbing alcohol, which is a little nasty.

I asked my husband to put it on his hands just so I could take a picture for the article and he straight up refused.  Too stinky.

If you’re going to convince anyone to use this, consider adding a few drops of some kind of fragrance.  Something like lavender or tea tree essential oil, which also have anti-microbial properties.

If you’re not thrilled about the pile of chemical gelling agents, then simply don’t make hand sanitizer gel.  Try a simple spray instead.

In fact, the “natural” brands of hand sanitizer are all sprays instead of gels for that reason.

You could make more or less the same thing at home, starting with a bottle filled at least 2/3rds of the way with rubbing alcohol that’s at least 90% alcohol.  Add in a bit of glycerine as a skin conditioner (and for bonus antimicrobial properties), top off the bottle with water and a drop or two of fragrance.

That’s it, you’ve just made the same hand sanitizer that’s currently selling for $20 an ounce from internet profiteers.

While something as simple as rubbing alcohol in a spray bottle works, there are plenty of ideas that don’t.

Vodka is a neutral alcohol, but most don’t have a high enough alcohol percentage to qualify as hand sanitizer.  Sixty percent alcohol would mean at least 120 proof, and most vodka is 80 proof. (High proof grain alcohol is an exception, and would work.)

Save it for drinking (or make a batch of echinacea tincture, which helps in other ways).

Witch hazel, likewise, may not contain enough alcohol to be effective.  The Thayer’s Witch Hazel I have on my shelf is only 10% alcohol, and the rest is mostly glycerine.  It may well be anti-bacterial, but it’s not potent enough to be called hand sanitizer.

There are a number of hand sanitizers that don’t use alcohol.  It seems like most of them use Thymol, which is extracted from thyme leaves.  Examples include clean well hand sanitizer and Seventh Generation Disinfecting Surface Wipes, which claim the same 99.99 percent effectiveness as other alcohol-based brands.

I’ve seen people claiming that a few drops of thyme essential oil in water is equivalent to homemade hand sanitizer, but I wouldn’t bet on it.  While there are plenty of antimicrobial herbs and plants, reaching for hand sanitizer means you have a good reason to believe you’ve touched something nasty, and I wouldn’t trust a few drops of essential oil to get the job done.

As always, hand washing is the very best option for preventing the spread of surface microbes, but in a pinch, homemade alcohol hand sanitizer will get you by until you can find a sink.

This site uses Akismet to reduce spam. Learn how your comment data is processed. 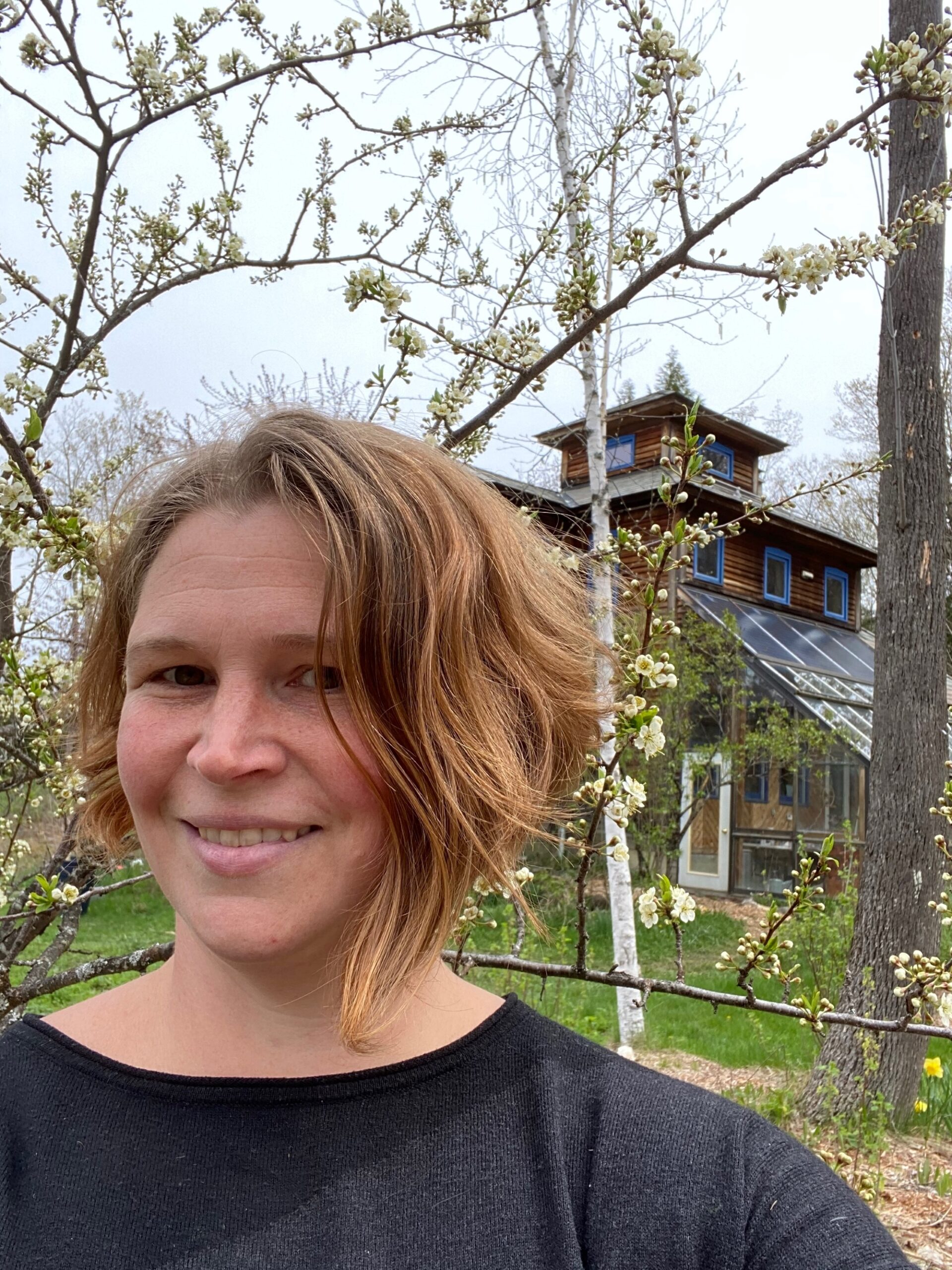 Adamant Living is all about giving you the tools and resources to live your very best life!

My goal is to encourage you to focus on quality over quantity, and strive to strive for a healthy, all-natural lifestyle. Read More...

Adamant Living is a personal blog and a woman-owned small business.  I am a participant in the Amazon Services LLC Associates Program, an affiliate advertising program designed to provide a means for sites to earn advertising fees by advertising and linking to Amazon.com. For more details, visit my disclosures page.